Home > Blogs > Java Vs Kotlin, Which is better for android app development?

Java Vs Kotlin, Which is better for android app development? 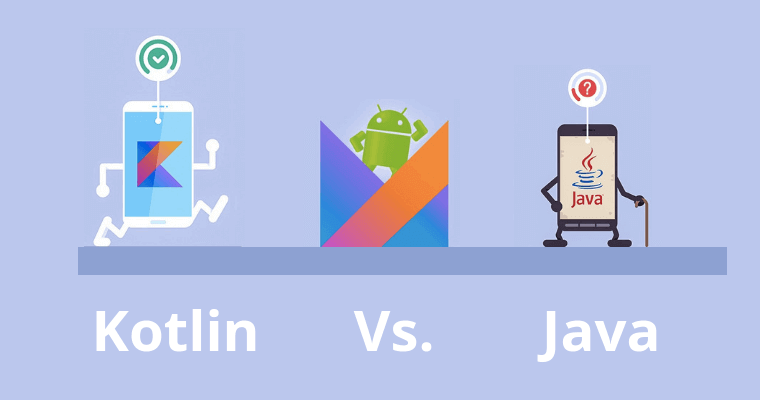 Java is being used for 23 years now. It is a robust language and such a long survival indicates its ability to meet modern challenges in the development world. It holds a supreme position in the list of most popular languages following C and C++, setting the highest usability record with millions of developers and systems.

Whereas Kotlin was announced as official language for android development in 2017. It’s well-known fact that each and every technology has something different to offer. Updates in the older one and introductions to the newer technologies are not new to us.

Certainly, Kotlin’s widespread usage in no time indicates its ability to replace Java, but Java’s ecosystem is quite large and Kotlin is influenced by Java to a greater extent. As of now, it seems unfeasible considering Java’s grown-up community.

Java is an object-oriented, widely-used, standard, and stable language in the programming world.

Kotlin is considered as statically typed programming language that runs on JVM(Java Virtual Machine). It is developed by JetBrains and open-source community. The ‘Kotlin’ name came from Kotlin Island located near the Saint Petersburg. It is supported by leading IDEs and compatible for Java 6 or Java 8.

Android is written in Java along with C and C++, and this could be a reason why Android developers are more inclined towards the use of Java. Write once, run anywhere principle of Java suggests that compiled code can run on all Java-supportive platforms without the need of recompilation. This principle contributed a lot in making Java more popular and second most active language on GitHub.

Take a look at the below comparison:

Some advantages of Kotlin over Java :

Kotlin is interoperable with Java, meaning that you can leverage all existing Java libraries, JVM, and frameworks.

The developers who know Java can easily learn Kotlin. Switching from Java to Kotlin does not have much overhead and adopting it doesn’t cost anything.

Who Is Using Kotlin in their Development Environments?

There are many factors and views that matter when we compare any language to another. Both Java and Kotlin are related. One thing we can say from the comparison is that Kotlin has the potential to replace Java.

In Dubai the trend is still of Java. Due to its robust features and available resources, businesses still feel java is a better option for their mobile application development.

You can go through full comparison here.

At Emqube we focus on building high quality hybrid mobile apps. If you would like us to build an app for you, contact us at  https://emqube.com/contact-us/customer-enquiry/