Home > Blogs > Use of Artificial Intelligence in Android Applications

Use of Artificial Intelligence in Android Applications 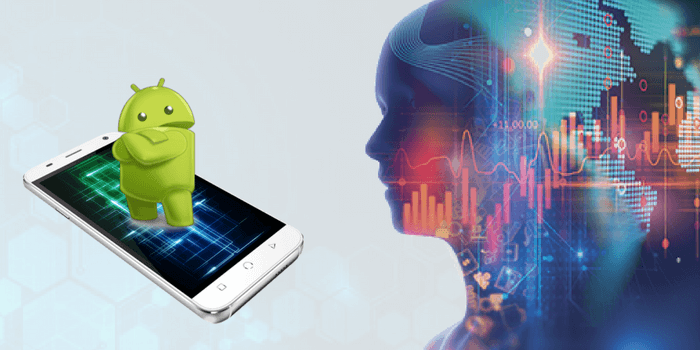 Believe it or not, we are currently living in an age of technological revolution. Technologies that were once only a dream are now becoming a reality and artificial intelligence is now indispensable to business success all over the world. Before voice-based searches came along, it was hard for users to navigate through AI-based apps, but nowadays things, like performing voice commands and communicating with customer service, are a normal everyday function of artificial intelligence.

During last year’s Google I/O conference, it was announced that Google was shifting its priorities and is now becoming “AI first” instead of “mobile first.” During this year’s conference, Google announced that it was launching a series of new toolkits and programs that will make it easier to create artificial intelligence apps for Android. These new toolkits included the Android Jetpack and developers could start using all of the new tools right after the conference.

The new ML Kit now brings machine learning to mobile devices. The base APIs allow Android app development services to easily include amazing features such as:

These and many other features will be available to Android and users in the near future. Interestingly enough, the ML Kit from Google will be distributed as a Firebase SDK, which would allow the ML Kit to be fully integrated into Google’s best mobile development hubs.

One of the main ways that AI will be able to understand user behavior through analyzing the large volumes of data stored inside Android apps. This goes far beyond Gmail scanning through your e-mail and offering some quick reply options. The artificial intelligence for Android devices will be able to affect the user’s everyday life. For example, right now an AI app for Android can calculate the distance you walked on any given day as well as how many steps you have taken, how many flights of stairs you climbed and many other physical activity data.

You can find more about AI for android here.

At Emqube we focus on building high quality mobile apps. Contact us if you would like us to build an app for you.