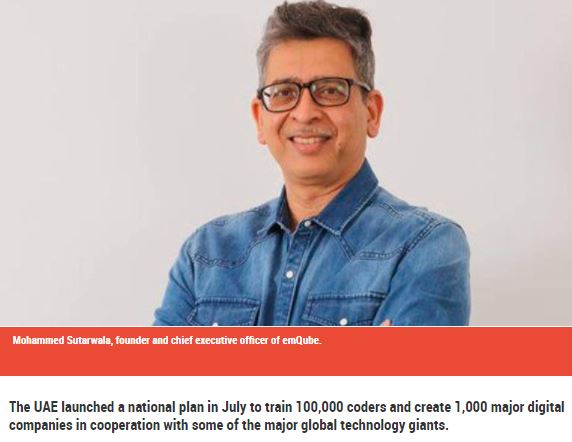 emQube has been a lone ranger in the campaign to develop software in UAE and not to outsource. The government’s announcement to award Golden Visas (10-year visa) to coders is the right move in this direction. Our Director Mohammed Sutarwala’s view reflect in this Khaleej Times coverage.

The UAE should expand the scope and definition of coders to include other software development professionals such as system analysts and business managers etc so that the IT sector flourishes in the country and fewer projects are outsourced, says Mohammed Sutarwala, Founder and Chief executive officer of emQube .

The UAE launched a national plan in July to train 100,000 coders and create 1,000 major digital companies in cooperation with some of the major global technology giants.

“In the software development cycle, coders are at the bottom of the pyramid. They may be good in coding but they have to be told what to code. Then you have people who are in testing. These guys are also very important. Then there are managers and team leaders, who may no longer code but their job is to review the code and make sure that it’s built properly. Then there are business managers who deliver the application to the client and help to implement,” he said.

Sutarwala stated that system analysts are the top-ranked professionals in the hierarchy and a 10-year Golden Visa for system analysts will attract more people and get more projects into the UAE irrespective of where the software is coded.

Established in 2003, emQube is a bespoke software development company based in Dubai. Most software companies have a sales representative in Dubai but development is done off-shore, while emQube does all the coding here. Its clients include BMW Middle East, Nestle Middle East, DIFC Courts, and E-Movers among others.

Sutarwala estimates that over 80 per cent of all software developments projects are outsourced due to cost efficiency, largely to India and other CIS countries.

In order to attract the talent and make the UAE the hub for software development the Golden Visa is a good start but there is need to increase the economic competitiveness of coding in the UAE, added Sutarwala.

View the article in Khaleej Times.